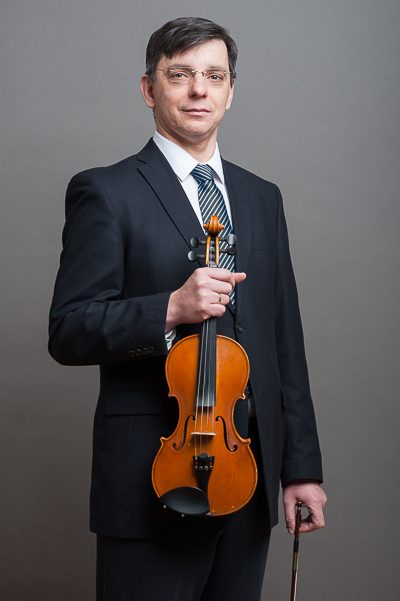 Member of the orchestra since 1997. He graduated from the Liszt Ferenc Academy of Music in Budapest, where he specialised in violin and composition. Tamás is a teacher of music theory, a composer and a piano accompanist. He works at the Primary Art School of Bornemisza Péter Secondary School. His favourite composer is Bach, his beloved compositions are St. John Passion, Passacaglia in C minor and Chaconne in D minor.

He has been married for 23 years. His wife is a teacher of Hungarian language and literature, they raise three children. Their daughter is a second-year medical student, their two sons are students at Bornemisza Péter Secondary School.

Tamás is a devote Christian who believes in the Bible, the universal divine revelation. He considers J.S. Bach’s art to be the most intense meeting point of faith and (classical) music. Probably that is the reason why he feels Bach’s music so close to himself, besides its inimitable uniqueness from a professional point of view, of course.

“I’ve found an enthusiastic performing base here that encourages my composing activities. I’d like to thank the orchestra for having performed almost a dozen of my pieces. Supportive feedback from colleagues has inspired me to further pursue composing. On this anniversary I wish the Dohnányi Orchestra can maintain its favourable position achieved in music life and even upgrade it in mid- or long-term. What’s more, I hope that a high professional standard rather than attempts to gain popularity remains at the core of this position.”