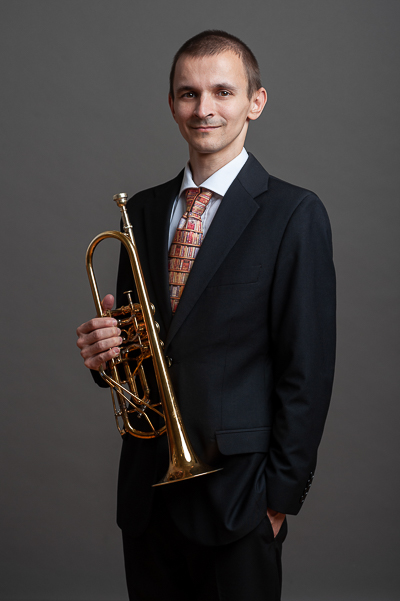 Member of the orchestra since 2002.

Voted Musician of the Season 2015-16 by the orchestra members.

He has two children: Emma and Lázár.

With the Junior Príma award winning In Medias Brass he achieved impressive results (five first prize. two second prize, special prizes) in numerous national competitions. From Japan to The United States they gave outstanding concerts and courses in many countries. He was successful even as a soloist; in 2004 he won the first prize in an international trumpet competition in Germany, and in 2006 he was awarded Artisjus Prize.

„The orchestra’s work is characterized by a relaxed and friendly atmosphere, and high quality. The programme of our concert is mixed including a lot of genres. It’s a great pleasure for the orchestra but also for the audience, proved by the fact that most of our concert is sold-out. It’s wonderful to play, to give something to many people.

I joined the orchestra in 2002, since then we have come a long way in which Gábor Hollerung played a great part. I wish ourselves to keep playing together and having success for many years!”