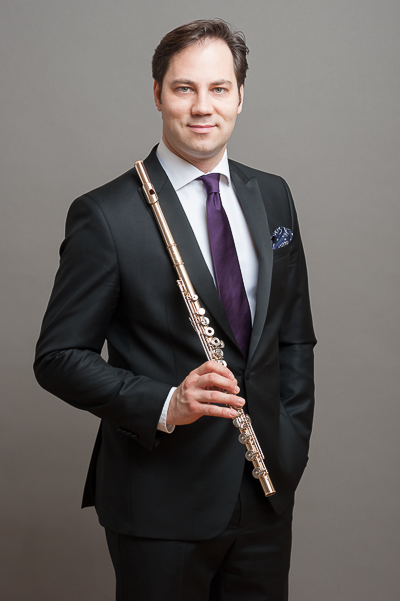 Dávid has been a member of our orchestra since 2003.

Although he has no official workplace outside BDO, he is a regular soloist or contributor of other Hungarian ensembles like Weiner-Szász Chamber Symphonic, Marcato Ensemble, the EAR Band, Sounds of Babel, the BonBon Matinee series, Budapest Saxophone Quartet. In addition he often organizes concerts himself. He also used to be a teacher and enjoyed it very much.

Dávid’s no. 1 favourite composer is J. S. Bach, and his no. 2 is W.A. Mozart. He is fond of lots of pieces of music but his most admired one is Goldberg Variations, BWV 988 (Bach).

Family ties are most important for Dávid: he feels lucky to be surrounded by – beyond his wife and daughter – a very cohesive extended family. Brought up by artist parents, fine arts have accompanied him just as closely as music from the very beginning. Even dance has entered his life, through his wife.

He was eight years old when his father became his teacher, and later he studied in the classes of Zoltán Gyöngyössy and István Matuz. Out of his numerous Hungarian and international achievements, he is especially proud of two choral competition victories, because his old choir mates are now amongst the best-recognized vocal performers in Hungary. Alongside playing instrumental music, he sometimes tries to develop his conductor’s skills (and has also been  category winner of international conductor competitions twice). He has also had the pleasure of conducting BDO several times.

He positions himself to be somewhat of a perfectionist who strives for accomplishment and excellence in all areas of life. He is hooked on travelling, hiking in nature, exercising, tinkering, listening to music and cooking.

‘This orchestra has a really inspiring milieu where I have always liked playing, from the very beginning. Gábor’s very strong personality and musical competence is the engine of Dohnányi Orchestra from day 1. Work with him requires constant readiness and flexibility for each of us without exception. Maybe this is how Dohnányi could become a varied and multicolour ensemble, able to switch freely between the different genres and styles like movie soundtracks, jazz, contemporary music, opera, musical and many more.’

‘When I joined the orchestra, at the age of 23, I did not expect myself to develop a real love relationship with not only the flute but also the piccolo. We regularly get the chance to work together with amazing guest conductors and soloists, thereby enhancing the accomplishment and quality standard of the orchestra. I am grateful for having been able to perform as a soloist or conductor with the orchestra several times. I hope to keep playing music with this superb team and I wish to get the chance to propagate classical music in a more peaceful and affectionate world. May we move year by year towards an easy and predictable environment to live and perform in. For the future, I dream of an unstoppably growing audience and our gradually discovering the significance and beauty of classical music.’