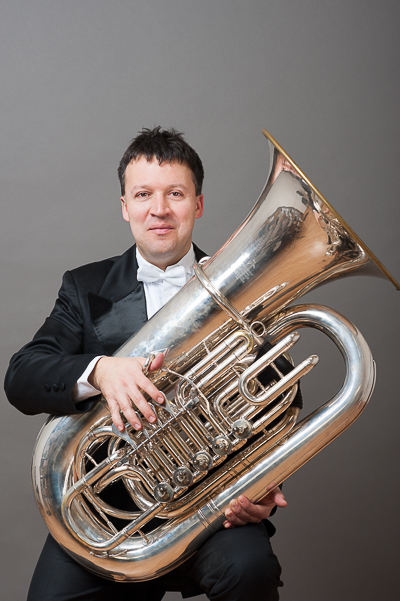 Member of our orchestra since 2001. Besides the BDO, he also plays at Modern Art Orchestra (they play big band music and modern jazz) and at Papajazz formation (they play traditional jazz). He teaches at 17th District Bartók Béla Art School.

He cannot pick a favourite composition since he has many favourites.

A lot of people asked me: Why trombone? Well I was about  8-9 years old when in Hajdúszoboszló there was a wedding in the neighbourhood, and in the street a wedding orchestra showed up in which though not a trombone, a helicon was the bass. At this moment I realized what kind of instrument I wanted to play.

“I love playing in BDO because of the versatile, colourful repertoire, and because the orchestra is open to play other genres besides classical music. What I miss, after all, might sound weird because it’s also related to the repertoire. (It’s true not only for the BDO but for other symphony orchestras as well) It seems to me that classical concert programme (such as overture, concerto, symphony) is dying out.”