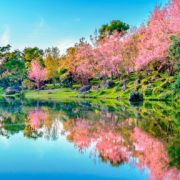 Mahler: The Song of the Earth

If you wanted to write a work about earthly existence,what motifs would you choose? What would you consider the most defining experience of existence on Earth? From what perspective would you try to capture this journey that is so rich in experiences? Would you choose a happy tone or a sad one? Would you write about events or feelings? Moments of joy or things missed? About grievances, fears or lessons learned? How would you look back from the end of your life to life itself, in which you have travelled your own path as a traveller?

In Mahler’s The Song of the Earth, he answers all these questions, bringing together the aspects of life that fundamentally define existence on earth for him in six songs: he looks back on life as a whole through stages of pain, loneliness, youth, beauty, resignation and farewell.

Naming it a song out of superstition

Mahler originally intended his work as a symphony for two vocal soloists and orchestra, and it was only because of his own superstition that, eventually, it got named a song cycle. It was in the year 1907 that he began to write the first notes of his new piece. By this time he had already written eight symphonies. However, he hesitated to call the work in progress Symphony No. 9, because no one in this genre had managed to go beyond the magic number nine since Beethoven: all of Mahler’s predecessors who had reached the 9th symphony died shortly after. That he was secretly thinking in terms of a symphony is revealed in the structure of the work: the first movement is a regular sonata form, the second a traditional slow movement, the third, fourth and fifth incorporate the Intermezzos and the Scherzo, and the sixth the slow Finale. It is interesting to note that after writing the song cycle, Mahler actually completed his 9th symphony, and after finishing it, he even started the tenth. Ironically, he did not manage to finish it, leaving only a fragment of it for posterity.

Melancholy, wisdom and a wax scroll

The genesis of the work was influenced by a number of events. In 1907, Mahler was living through one of the darkest and most critical periods of his life: he had lost his eldest daughter, the pain of which was still vivid in him. His leading position in the Viennese court opera was also in jeopardy, and he was eventually forced to resign. His marriage also went through a critical moment and his health deteriorated: he was diagnosed with a serious heart condition. The only joy he had left was the joy of work, but his gloomy mood was an essential element, defining his days. It was then that a friend gave him a book of poetry by Hans Bethge, a German philosopher, Germanist and Romance scholar, entitled Die chinesische Flöte (The Chinese Flute). Bethge had read French prose translations of poems by Chinese poets of the Tang Dynasty (7th-9th centuries), and was so fascinated by their beauty that while creating his own compositions he almost re-versified the original poems. After reading the poems, Mahler was struck by their melancholy mood, the wisdom in them and the attitude to life they suggested, so he decided to choose a few poems and set them to music.

Almost at the same time, he received a wax roll of original Chinese music from a friend, and he was also studying his musicologist friend Guido Adler’s treatise on the music of the Far East. These were the impulses that led him to the idea of a song cycle, in which heterophony, a characteristic motif of Far Eastern music, would be used, but also pentatonic tone lines.

Mahler allowed himself the freedom to select and touch on poems freely from Bethge’s volume, rather than following the original poems one by one. Thus, for example, the text of the last song is the result of merging two poems. Each of the selected texts is in some way related to all things that bring joy and beauty in life, but also to suffering, because these things, by their ephemeral nature, cannot be preserved forever.

The song cycle begins with a drinking song, in which the toast given by the lyricist is not to life, but death. For the one who makes the toast, the consolation for all the pain, withering, passing away and sorrow that life on earth can bring is to drink wine. And although in the image of spring the eternity of Heaven is glimpsed for a moment, it is immediately confronted by the mortality of Man, and death bursts into life in the form of the roaring of an ape, reminding us of its finiteness.

The second poem, entitled The Lonely Man in Autumn, depicts the autumn landscape in painting-like images, the moment when the still-blossoming trees begin to drop their petals. Here, the changing of the seasons remind us that everything that brings us joy slowly fades away. Just as the weary autumn landscape is left alone with the memory of the blossoming trees, so too the human heart is filled with remembrances when it is tired: it bids farewell to its love and laments its loneliness.

The title of the third poem is Of Youth, and it is an idyllic image of a day spent in a white porcelain pavilion, where friends engage in light chatting and writing poems. The idyllic setting is defined by the tranquillity of the pond surrounding the pavilion, with the moon shining in the background. It’s a picture of a perfect day, with its simplicity, the carefree ease of youth, the reflection of the pavilion in the pond, when we are not yet thinking of the passing of time.

The fourth poem – Of Beauty – captures an almost dreamlike moment: “young girls” with “slender limbs” and a “perfumed scent” are picking flowers on the riverbank when suddenly a troop of young horsemen passes by, “gleaming like the sun’s rays”. One of the young men’s horses “neighs happily”, attracting the attention of one of the girls, whose heart is immediately touched by love. The young man rides on, and the girl looks after him longingly. The whole picture fades like a vision… and so does love.

In the fifth poem, entitled The Drunkard in Spring, dream and wakefulness alternate, but the stupor makes it difficult to draw the line between the two states. Wakefulness is overwhelmed by the agonies of life, so there is nothing left to do but drink to exhaustion. In the loneliness and drunken mood of the night, the image of spring appears for a moment, but the speaker no longer knows whether it is real or a vision, because in his heart he has given up on it.

The last poem is entitled The Farewell. It is a beautiful description of nature quietly going to rest: the earth is also in need of repose, “the world falls asleep”. The wanderer, who has walked the earth far and wide, now returns to his homeland to seek rest for his “lonely heart”. The thought of a final farewell is expressed in his words, and the heart calms down when it thinks of home: but it is no longer the home of this world.

Freedom from all bonds

The last lines foreshadow the image of spring, when the earth will blossom again and “everywhere and forever / the distances are blue and bright”. Life is eternal, suffering can only be linked to life on earth, but behind earthly existence something higher, something immortal is revealed… At the end of the poem, everything is illuminated by this otherworldly light. Death is no longer a renunciation or a pain, but also a release from the bonds of time, and the pains of earthly life are dissolved in infinite eternity:

blooms in the spring and

is newly green! Everywhere and forever

the distances are blue and bright!