Stravinsky’s Concerto in E-flat Major was named “Dumbarton Oaks” after the estate of Robert and Mildred Bliss of Washington, D.C., who commissioned the piece on the occasion of their 30th wedding anniversary. Written for chamber orchestra, the concerto is considered to represent the composer’s Neoclassical period and was evidently inspired by Bach’s Brandenburg Concertos. An exclusive performance of the piece, Stravinsky’s last completed in Europe, was premiered in 1938 at the Dumbarton Oaks Music Room while the composer was treated in the hospital with pneumonia. The public premier was held in Paris a month later.

In 1783 in Vienna, Mozart composed “Vorrei spiegarvi, oh Dio!” specifically for his sister-in-law, Ms. Aloysia Weber, an outstanding vocalist. According to the original concept, this aria was meant to be at the end of the 1st Act of the opera Il curioso indiscreti by Pasquale Antossi. It is obvious that the plot of this opera and Mozart’s later one, Cosi fan tutte, share several similarities. Constanza’s aria is considered a gem of the opera repertoire and demands an exceptional technical skill. The piece was dedicated to Catarina Cavalieri, who at that time was one of the most celebrated singers of her age. Tonight, both arias will be performed by Erika Miklósa.

“Fantastic Variations on a Theme of Knightly Character for Orchestra” is the subtitle of Richard Strauss’s Don Quijote. The composer preferred the classical format, using themes and variations, to suit the story of the sad-faced knight, however extreme his expressions might be. The well-known story follows the adventures of Don Quijote, who reads so many chivalric romances that he loses his sanity and decides to become a knight-errant.

The score is 45 minutes long and the theme of Don Quijote can be heard in the solo cello and solo viola parts, while tenor tuba and bass clarinet represent his squire, Sancho Panza. Ten variations lead the audience through the story. 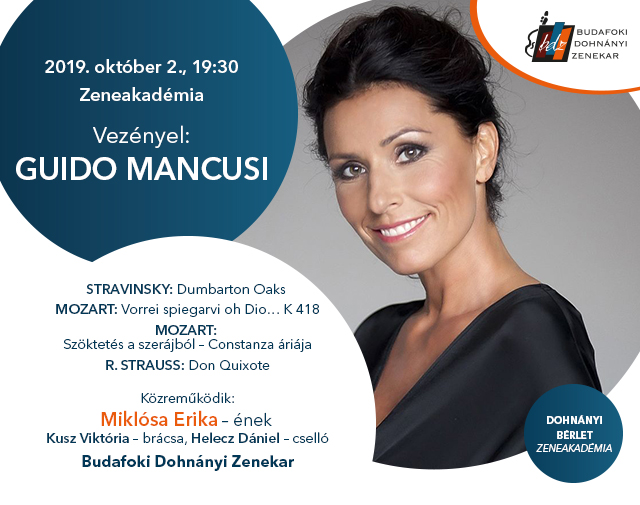