The Symphony No. 1 in E♭ major, K. 16, was written in 1764 by Wolfgang Amadeus Mozart at the age of eight. By this time, he was famous in Europe as a wunderkind performer, but less as a composer. The piece was probably composed in the Chelsea area of London, since the family had moved there at the time because of Leopold’s illness. The work shows the influence of several composers, including Leopold Mozart and the sons of Johann Sebastian Bach, especially Johann Christian Bach.

The three-part form is customary among Mozart’s early symphonies, he only later took to four-part compositions. The first part essentially complies with the requirements of a sonata. The second part, written in C minor, features a repeating accompaniment consisting of sixteenth-triplets. The four-note motif highlighted in the second part can also be discovered in the finale of Mozart’s Jupiter Symphony. The third movement is a vivacious part of the composition and features an interesting clash of contrasts between the volume of the violins and that of the complete orchestra.

Roland Szentpáli’s trumpet concerto was composed upon the request of the Hungarian Radio Symphony Orchestra for the 40th birthday of trumpet artist Gábor Tarkövi. The piece consists of three movements, all of different character, atmosphere and musical concept. The basic concept of the composer – owing to his interest in the language of jazz – was to compose a piece traditional in terms of form and orchestration, but employing jazzy tools in musical language and harmonies. The first part builds on loop-like processes. It is driven by a continuous virtuoso internal rhythm, which the solo instrument occasionally hooks onto, but then continues in a completely opposite character. The second movement has an intimate, passionate character, in which the soloist plays the cornopean, an instrument that plays a much softer tone than a trumpet. The pulsation and musical material of the closing part is polyrhythmic, with the main theme often sounding like a mixture, characteristic in jazz and the movement features more of a structured improvisation rather than a composition. At the end of the part, the soloist plays on a piccolo trumpet, thus rendering the orchestration a new colour and character. Our soloist for the evening is Tamás Pálfalvi.

Shostakovich composed Symphony I. in F minor in 1925, at the age of 19, upon finishing his studies at the Conservatory of Petrograd as his graduation piece. The piece consists of four parts, however, the second two are played without interruption. The work begins with an introductory Allegretto section, which is developed from a duet between solo trumpet and bassoon and leads into the first theme. This lively march-like matter is reminiscent of the vaudeville and theatre music. The second subject is ostensibly a waltz. The development section features a return to mock-comic grotesqueries, although the sonata-form structure of this movement is entirely conventional. In the second movement we are presented with a ‘false start’ in the cellos and basses before a frantic scherzo begins with the clarinet. The piano features for the first time with rapid scalic runs. The third movement begins with a dark oboe solo transferring to a cello solo, and proceeds to develop into a crescendo, featuring a quotation from Wagner’s Siegfried. The consequent pianissimo passage for the strings anticipates the passacaglia from the Eighth Symphony. There is a drum roll attacca from the third movement into the fourth and the Allegro molto section culminates in a fortissimo timpani solo, a rhythmic motif featured in the third movement. A passage for solo cello and muted strings cleverly uses this motif along with several other elements, leading into a coda section which ends the work with rousing fanfare-like figures from the brass. 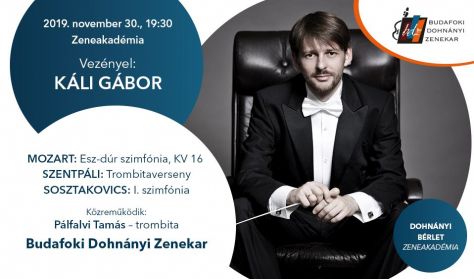