Paul Hindemith is a German composer, violinist and viola player. His masterpiece Mathis the Painter is a symphony based on an opera of the same title and was premièred in 1934 with great success. The symphony has since proved a great hit all around the world and is considered one of the classics of its genre. Three of its movements evoke the images of the Isenheim Altar in a deep and powerful artistic articulation, with compact and convincing expression, fruit of a composer’s technique ranging from mediaeval soundscape to that of atonality. The title of the first movement (picture) is: Concert of the Angels. The title refers to an old folk song starting “Es sungen drei Engel ein süssen Gesang” (Three angels once sang a sweet song – the tr.), the melody of which is used as cantus firmus in the music of the movement. This movement was also the overture of the opera, by the way. The slow second movement is entitled Entombment, recalling the sixth scene of the opera through its funeral music conveying a deep touch of awe. The longest and most remarkable part of the symphony is the third, closing movement elaborating an instant of the finale of the opera: The Temptation of Saint Anthony. It is no secret that the figure of Saint Anthony and Matthias Grünewald became one in the composer’s fantasy: the vision of the saint’s trials gains a very concrete form and clear meaning through the depiction of the dramatic struggles of the artist.  The saint’s victory over the powers of hell and the moral triumph of the artist who has managed to get back to himself gain expression through the sounds of the Gregorian praise (Lauda Sion Salvatorem) and Alleluia at the end of the movement.

Our concert will be continued by Ilona Dobszay-Meskó’s work entitled Concerto per Flauto. This is what the composer writes about it: “My flute concerto was written for Zsuzsa Vámosi-Nagy’s diploma concert, at the same time with my cantatas based on the poems entitled Nárcisz és Psyché (Narcissus and Psyché – the tr.) by Sándor Weöres. Movements 2 and 3 of the concerto borrow the musical materials of movements 12 and 8 of the cantata and bring them to fulfilment in virtuosic instrumental music. Just as in Baroque concertos, the solo flute is almost equal to the parts of the small orchestra. Playing the solo requires the highest degree of professional competence and an equal measure of virtuosity and sensitiveness on behalf of the soloist.” The excellent flautist of our orchestra, Berta Bánki shall be the one to present all of the above to the audience.

Mendelssohn was twenty years old when he first visited Scotland and felt very engaged by the untamed beauty of the wilderness and the twists-and-turns of the historical events associated to them. Although he had the first sketches instantly made in his head, good ten years passed before he completed the symphony which is a masterful blend of the composer’s characteristic musical expression and the inspiration he gained from the landscape. 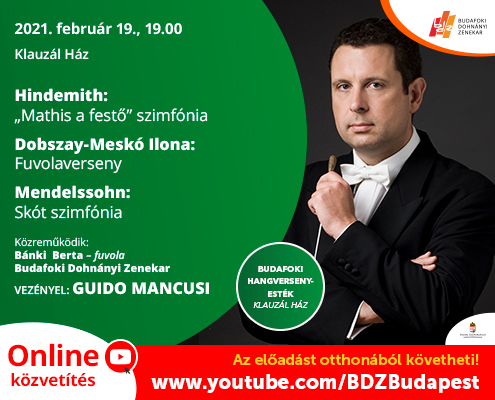