Dániel Dobos’s Sylvanus was written for violin and symphony orchestra and was first performed in May 2019 at the composer’s Master’s Degree concert at the Liszt Academy of Music, Budapest. Despite his young age, Dániel Dobos has already won prestigious prizes, and came first in the Bartók World Competition in November 2018 with his Drumul Dracului. The same piano piece that is based on a Moldavian dance melody also earned him the Junior Artisjus Prize at the end of February 2019. Tonight’s soloist is folk music teacher Máté Vizeli, who was awarded the Prima Junior Prize in 2018 and won first prize in the competition of the Hungarian Composers’ Association on occasion of the 135th anniversary of Kodály’s birth with his own work entitled Kalotaszeg Sonata. (Interestingly, Dániel Dobos won second place in the same competition with his composition for four folk singers and double bass, entitled Vale /Istenhozzád. [Farewell – the tr.])

The triple concerto for violin, cello and piano is a late example of the genre of “sinfonia concertante”, growing gradually less important at the time, which was also Beethoven’s only composition in this genre. The themes of the opening movement of a march-like character, the expressive A flat major Largo and the dance-like Polacca are all marked by the presence of dotted rhythm. What is interesting about the work is that Beethoven, unusually for him, takes into account the abilities of the soloists: the relatively easy-to-play piano solo was written for his pupil, Archduke Rudolf, while he seems to have demanded much more from the strings section, as the violin and the cello were played by professional musicians belonging to the court of the archduke.

One of Musorgsky‘s best-known works is Pictures at an Exhibition, a typically Russian piece of music, a model of programme music. The work is in fact a cycle of character pieces inspired by a posthumous exhibition in 1874 by the composer’s architect-painter friend Viktor Hartman, who had died the previous year.

Mussorgsky – Ravel: Pictures at an Exhibition 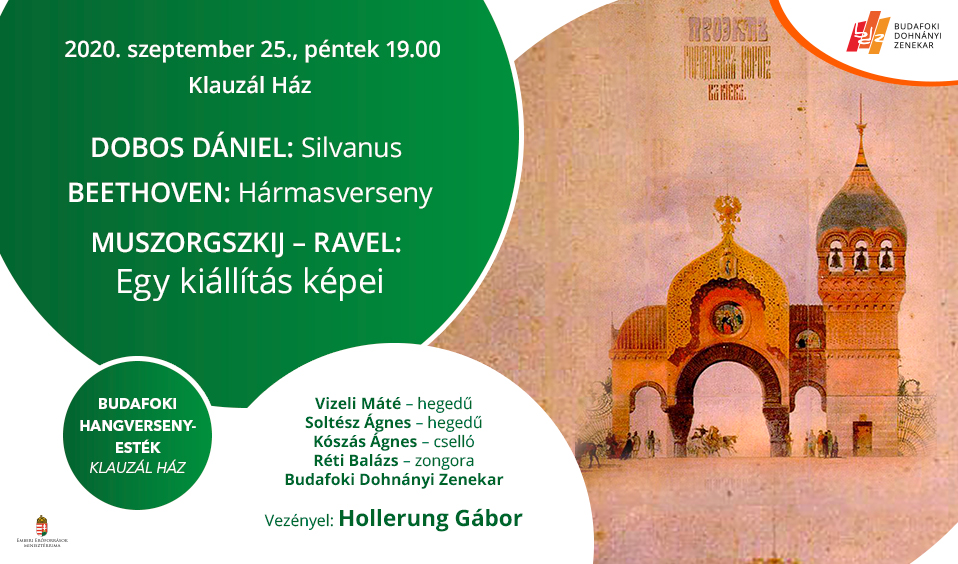