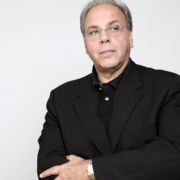 Budafok Dohnányi Orchestra has been working with Roberto Paternostro for more than 15 years. The highly skilled, broad-minded conductor, who is about to return to the podium after a long hiatus, will conduct the orchestra on Earth Day in this season. Their performance on 22 April at Müpa Budapest will include Mahler’s The Song of the Earth.

– You have Italian and Jewish roots. How has this influenced your cultural identity?

– My mother is Austrian, of Jewish origin, my father is Italian. They met in America. I grew up in two cultures, so to speak; as a child I spent a lot of time in both Israel and Italy. This duality, the different experiences had a strong influence on my life and on my cultural perception.

– What inspired you to become a musician? Were there musicians in your family?

– Apart from my aunt, who worked at the Teatro La Fenice, there were no professional musicians in the family, but everyone was very musical and music played an important part in our lives. One of my uncles, for example, emigrated to London in 1938, where he became a producer for EMI and was able to work with some great personalities of the musical art world such as Karajan, Klemperer and Sawallisch. Whenever we spent time together, he told me a lot about these musical legends, so practically I grew up with stories about them.

– Did you have an artistic role model?

– Since I grew up in Vienna, I got to see and hear the greatest masters play in concert halls. I got to hear Solti, Karajan, Kleiber and Karl Böhm live, whether in concert or rehearsal. It was a wonderful experience and they all became my role models. I had exceptionally high respect for Klemperer, whose daughter is a very dear friend of mine, and Karajan, as I was his assistant for five years.

– The conductors you have just mentioned were all exceptional artists. What do you think makes an artist exceptional?

– Well, that’s a mystery. But certainly, there are values that we must embrace as conductors. These include striving for excellence, humble and conscious learning and, of course, inspiration – that, however, obviously, cannot be forced. Furthermore, it is important to always strive to do better, to never give up and to believe that what you brought to the table was good. I, for example, never listen to my old recordings because I would probably just be dissatisfied and feel that we have to do it all over again right now because it will definitely be better this time. Of course, I’m sure a few bars would actually turn out better…

– In the past year, not only the chaos created by the coronavirus has played a role in your life, but you have also had to deal with serious illness. How has this affected your artistic life?

– Well, it was a big change indeed, weeks of chemotherapy, a series of operations… I spent a lot of time in hospital. A turn of events like this gives you a lot of time to reflect, it makes you realise the mistakes you’ve made and that you have to re-evaluate almost everything in life. And at such times we also hear music differently.

Of course, Covid is a big change in itself, and especially in the art world. Art is essentially based on an audience, and it was very difficult to play without an audience. Personally, I also dedicated the concert-less period to the study of new works: for example, I got very close to Dohnányi’s art, especially Symphony No. 1, but I also worked on some of his smaller musical pieces such as the Suite No. 16 or the overture to the opera Aunt Simona.

– In April you will be working with Dohnányi Orchestra at Müpa Budapest. How are you preparing for this project?

– I must admit I’m a bit nervous, as I haven’t conducted anything for two years, and this will be my first concert after a long break.

– What are your memories of the orchestra?

– Working together with BDO goes back a long time. I clearly remember our first concert, where I conducted Stravinsky’s Firebird and Beethoven’s Eroica. Even then I was impressed by the strength and discipline of the orchestra, but most of all by the joy they took in making music. Fortunately, that hasn’t changed since!

– What is the meaning of art and music to you?

– Music is the meaning and main substance of my life. Without music and art, our lives would certainly be poorer. But the big question is to what extent music can influence our character. What I feel is that a day without music is a day wasted. However, at times I do need to keep my distance in order to hear a piece of music in a new light. If I don’t encounter a piece for a long time and then pick it up again, it feels like hearing it for the first time. This is the case with The Song of the Earth, which will be performed at Müpa Budapest in April, and which I last conducted in Buenos Aires a few years ago, and now it feels almost like stepping into unknown territory.

You have conducted many Mahler works leading the orchestra…

– I have a special relationship with Mahler. Of course, you can’t grow up in Vienna without Mahler, and I myself conducted his works very often in later years. In fact, when I was music director in Kassel (where Mahler had previously held the same post), we even created a Mahler Festival. I also have very good connections with the Mahler Festival in Toblach. Toblach is the town where Mahler spent his summer holidays and where he composed The Song of the Earth. BDO and I were invited to the festival just before the pandemic, and this year – it seems – we are finally making it a reality. I have been to Toblach many times, but it will be a particular pleasure to be able to conduct this work with this wonderful orchestra in the very place where it was written. Before that, however, I shall do so at Müpa in Budapest, as part of the great comeback.